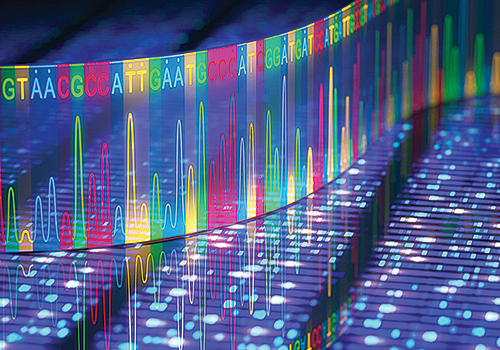 Next Generation Sequencing: What Does the Future Hold?

By: Michael Caine
In: Technology

Next generation sequencing is a method of sequencing the genome that is much faster and less expensive than genome sequencing techniques that were used before. This has enabled advances in medicine, including the ability to search cancer tumors for multiple mutations at the same time, assisting clinicians in developing individualized treatment plans for cancer patients, and diagnosing and treating rare genetic disorders.

Advances in sequencing technologies in the future, including artificial intelligence, deep learning, and machine learning are expected to make next generation sequencing even faster in the future as well as making it more powerful.

The Evolution of Genetic Sequencing

NGS achieves its speed by sequencing a large number of samples in parallel. It uses pair-end sequencing, which enables the DNA to be read in both directions, providing twice as much information in the same amount of time. Because of next generation sequencing’s speed and accessible costs, doctors can sequence the entire genomes of their patients, which significantly increases their ability to make diagnoses for cancer or rare genetic diseases that would not have been possible otherwise.

The Future of Genetic Sequencing

In the future, next generation sequencing will become even more powerful through the use of machine learning, deep learning, and artificial intelligence.

Much of the data that a next generation sequencing run provides is not useful. Artificial intelligence might be used to determine the optimal sequencing depth, which refers to the number of base pairs that are read. This result would be sequencing that is even faster and less costly than it is now.

Machine learning identifies patterns in data. Applied to data from NGS, this might be used to create computer models that could predict an individual’s chances of developing a particular disease or predict how they would respond to particular treatments.

Deep learning uses layers of artificial neural networks, which act in ways similar to the way our nervous system works. It might be used to identify specific mutations that are associated with diseases.

These advanced techniques can be used in a variety of genomic-related applications. They can be used throughout the whole cycle of medication development, including research and development, clinical trials, and manufacturing. They may also enable researchers to find treatments for diseases even if they don’t fully understand how the diseases work.

Tools using artificial intelligence, machine learning, and deep learning are expected to continue to improve in the future, which, in turn, will make next generation sequencing increasingly faster, more efficient, and more affordable, enabling it to be used in even more applications.

2022-08-25
Previous Post: 5 Key Strategies to Simplify Students Learning Difficulties
Next Post: Why Should You Have Outdoor Roller Blinds Installed In Your Home?