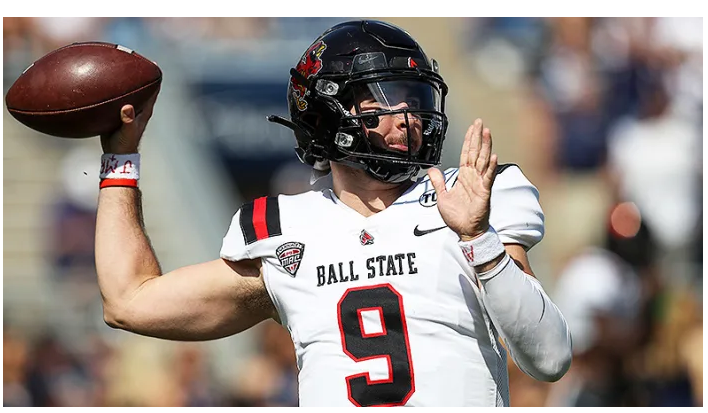 Ball State has one final opportunity to get to the magic number of six when it hosts Buffalo for the final game of the 2021 regular season for the two MAC teams. These two teams last met in the most recent MAC Championship Game, but much has changed since then.

The Cardinals (5-6, 3-4 MAC) enter Tuesday night’s game needing a victory to even their record and become bowl eligible. The Bulls (4-7, 2-5) are simply looking for some positive momentum to end the campaign after losing three in a row.

Ball State has dropped its last two games, the first a 30-29 heartbreaker to Northern Illinois on Nov. 10 followed by last Wednesday’s 37-17 loss to Central Michigan. Buffalo’s skid has included a 56-44 defeat to Bowling Green on Oct. 30, a 45-18 rout by Miami (Ohio) on Nov. 9, and a 33-27 overtime loss to NIU, who clinched the MAC West Division with that victory.

When Buffalo Has the Ball

Matt Myers made his first start in more than two years last week against Northern Illinois as Kyle Vantrease is likely done for the season. Myers held his own, throwing for 162 yards and a touchdown and adding 43 yards on the ground, but he also fumbled the ball away on third-and-goal from the 1-yard line in the first possession of overtime. The turnover was costly as the Huskies scored on the next play to win 33-27.

For the season, Myers has completed 59 percent of his passes with four touchdowns and just one interception, as most of his previous action had been in relief. He’ll try and find open receivers against a Ball State defense that is giving up 247 passing yards per game and a 67.5 percent completion rate, both of which rank 10th in the MAC.

Most of the Bulls’ success on offense has come on the ground. They are averaging nearly 200 rushing yards per game (194.1) to rank third in the conference. Dylan McDuffie leads the team and is third in the MAC with 982 rushing yards and he’s scored 11 times on the ground as well. McDuffie has largely been a one-man band, as he’s averaging 5.2 yards per carry while the rest of the team is at 3.7. Buffalo has produced 30 rushing touchdowns, which ties Kent State for the most in the conference.

The Cardinals know they must stop the Bulls on the ground. Ball State is giving up around 171 rushing yards per game and 4.2 yards per carry.  Thomas also is tied for the lead in interceptions with three.

When Ball State Has the Ball

The Cardinals’ offensive issues struck again last week when they managed 329 total yards in their 37-17 loss to Central Michigan. Ball State is just 10th in the MAC in total offense (345.5 ypg) and is second to last in yards per play (5.15).

Quarterback Drew Plitt has plenty of experience, but the production just hasn’t been there this season. He has a tidy 16:5 touchdown-to-interception ratio but is averaging well under 200 passing yards per game (188.4). He has three reliable targets to throw to, although leading receiver Justin Hall (59 rec., 606 yds. 5 TDs) missed last week’s game due to injury and his status for Tuesday night is uncertain.

The ground game hasn’t fared much better. Carson Steele leads the way with 784 rushing yards and six touchdowns. The freshman has run for 93 or more yards in four of his past five games. But overall, the Cardinals are ninth in the conference in rushing offense (142.8 ypg) and have half as many rushing touchdowns (15) as Buffalo.

Defensively, the Bulls are giving up more than 200 yards per game both rushing and passing.

If there’s one thing this Bulls defense excels in it’s getting to the quarterback. They are tied for second in the conference with 34 sacks. Five different defenders have recorded four or more sacks this season, including linebacker James Patterson. Besides the sacks, Patterson has racked up the tackles, entering this game second in the MAC with 104 total stops. He’s also in the top 10 with 11 tackles for a loss, including four sacks.

It’s been nearly a year since these teams played each other in last season’s MAC Championship Game. Although it’s been a disappointing season for both Ball State still has a lot of the players from the team that defeated Buffalo in Detroit almost a year ago. The Cardinals’ experience and the fact that they have more to play for needing one more win to become bowl eligible will be enough to come out on top at home on Tuesday night.

2021-11-23
Previous Post: The Importance of Cytokine Detection and Analysis
Next Post: Western Michigan vs. Northern Illinois Football Prediction and Preview