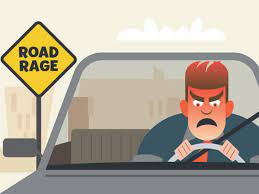 Imagine yourself stuck in traffic thinking about the bad day you’ve had, and then someone keeps honking at you.

Do you feel like getting out and fighting them?

Road rage is when anger-provoking situations like honking, tailgating, or being cut off make you angry enough to want to cause physical or verbal harm.

There are numerous incidents that can cause road rage. But mostly, what happens is you make a wrong decision, and someone overreacts, or they do it, and you overreact.

Either way, you need to know how to manage road rage incidents before they put you in harm’s way.

It doesn’t really matter what experience you have as a driver because everyone reacts differently to stressful situations. It’s an issue with emotional control, and every time you exercise restraint on the road, you don’t just uphold safety for yourself but everyone else.

Let’s show you some of the reasons road rage isn’t worth it and should be avoided.

When someone is pushing your buttons or not following the rules meant to keep everyone safe, it’s human nature to react.

However, it’s not a great idea to be the enforcer on the road, trying to tell people what they have done wrong. You may be trying to do some good, but you’re dealing with different personalities on the road, and you can’t predict a person’s behavior.

Acting on your emotions is a bad idea. Don’t try to teach the offender a lesson, as this can expose you to violence. In States like Texas and California, road rage incidents can involve gun violence. Exposing yourself to that kind of danger is not worth it.

It’s, therefore, better to keep yourself involved in other people’s affairs on the road.

If you are at fault, keep your responses measured or don’t respond at all. You also have to accept that there are situations you can’t diffuse. When that happens, prioritize getting yourself out of the situation.

For instance, if an angry driver stops and tries to confront you, don’t get out of the car. Drive away calmly and call the police. And if the road rage incident results in an accident, JT Legal Group advises that you inform the authorities and seek legal assistance.

If you tend to go off on other people and instigate road rage, you may want to keep in mind the consequences.

Remember, traffic rules are against aggressive driving, and if you were to get involved in a road rage incident and break one or more traffic rules like speeding, you could be prosecuted.

But often, road rage leads to physical attacks or erratic behavior that puts other motorists in harm’s way. In that case, you may face serious charges because the law recognizes such incidents as criminal offenses.

Considering aggressive driving will either get you criminally charged or cause an accident, it’s advisable to stick to traffic rules to ensure you are on the right side of the law. This means proper signaling, observing the speed limit, and making the correct change in lanes.

If you’ve ever had a day ruined by a reckless driver cutting you off, almost causing a collision, just remember that it happens to most people.

You become automatically stressed once you are unable to keep your anger in check, and the offender speeds off without getting an earful.

The American Psychological Association (APA) discovered that you are likely to be impulsive and make risky decisions on the road when angry. This means passing the speed limits or speeding off at a red light.

High anger driving increases your chances of getting in accidents. And sadly, the anger stays with you throughout the day.

We advise you to pull aside, take deep breaths, and return to a good frame of mind before continuing your journey.

Road rage is a common occurrence but can have devastating effects.

A situation can aggravate you or the next driver, and before you know it, things are out of hand.

It’s important to remember that road rage can cause physical harm, get you in trouble with the police or ruin your day.

Use the above tips to stay safe, but most importantly, always involve the police when you are in serious trouble.

2022-07-22
Previous Post: This section will give you instructions on how to compose an outstanding academic paper.
Next Post: What Does A Virtual Receptionist Do For My Company?